This morning Elle was doing a counting dance that Bryn just couldn't get right. It's really quite easy. Put your hand out as though motioning someone to STOP and then say a number. Alternate hands while jumping and saying more numbers. The numbers can be sequential, random or fake. For some reason Eleventeen kept popping up.

So...Jodie tells me about 6 times a week that I can post on "her blog." I keep telling her that I have nothing to say, but here we are in the middle of the world's greatest tournament festivities I have to say something.

The internet is killing me.

We don't have cable. Our TV is in a closet which is often closed. We watch movies on our computer, as well as the occasional television show. Last Thursday I had an apiphany in which I recalled that last year during March Maddness I was able to watch a few of the games during Conference Championship Week online. I ventured to CBS.com to find out if I might be able to get a few games, or a little something to get me the fix I needed. Well....

It turns out that the NCAA is broadcasting EVERY SINGLE GAME OF THE NCAA TOURNAMENT ABSOLUTELY FREE ONLINE! (You should have been screaming by the end, it's all caps and exclamation point) Last Thursday games began at noon and didn't end until after Midnight. This was repeated on Friday, and Saturday, and almost the same on Sunday.

With a new baby in the house this was the last thing I needed. A reason not to sleep. It has been incredible watching the different games and, although Elle's pick to win it all (Sienna) is out, there are some great games to come. I can't wait until tomorrow night to see what will happen. It's going to be an incredible weekend.

I hope Kent and Melanie don't mind, but this is the coolest thing I've seen in a while. Enjoy! They made it for their ward film festival. 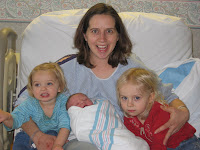 For any of you that don't know....Wade Brandon was born at 1:57 am on March 8th! He weighed 9lbs 0.6oz and was 21 3/4 inches long. It was a crazy experience, but I was able to have him naturally and I feel absolutely fantastic. I'm recovering very quickly and Wade somehow is surviving all the kisses and 'attention' his little sisters are giving him.

Unfortunately, my birthing experience in the hospital was not exactly as I would have liked. I was able to labor on my hands and knees in the hospital, right up until I was fully dilated. Here is an excerpt from my journal of what happened after that. (I apologize for the grammar in this. Hopefully you can understand my random journaling thoughts)

Another nurse showed up...which I immediately didn't like. I think her name was Angela. She briskly said, flip on over so you can push. Brandon said...can't she push like this? She said...she'll need to flip over. Brandon...but she's given birth like this before. She leaves to get the doctor. Doctor says...she needs to flip over so she can push. Brandon...this is how she wants to give birth, why does she have to flip over? Dr....it's easier for me. Brandon...what about her? At this point...I was near death...at least it felt that way and I was willing to do anything to get the baby out. I wasn't willing to 'fight' a doctor at that point. I could barely move. They immediately wanted me to flip over, which I was willing to do...but my body was in a contraction and I couldn't move. Finally I consented to their ridiculous request and my water broke. So...instead of using gravity and an easier position I was forced into birthing on my butt. They wanted me to pull my legs towards me and curve my back and tuck my chin and push. It was the MOST painful experience of my life. And the thing that was killing me is that I knew it would have been better in the position I was previously. So...while I'm going through all this pain. I said something like,...I can't do this, it hurts so much....which in my head was meaning...I can't birth in this ridiculous position, it's too painful. Lovely Angela smirked...'sweetheart, it's supposed to hurt'. Had I any expendable energy, I would have drop kicked her. Angela, sweetheart...it doesn't HAVE to hurt...not like that at least. Trust me, sweetie....I've done it before. Brandon eventually almost passed out from all this, and just as the baby was coming, he disappeared...meaning he had to sit down and take a few breathers. I was confused and wondered where my man had gone. He quickly came back to my side and Wade came out soon there after.

I don't want to take away from the amazing experience it is to have a child naturally. But, it is NO wonder to me why women have epidurals if they are required to birth in such a ridiculous and painful position. So...what did we learn?

1. What's easier for the Doctor is best.
2. Labor is supposed to hurt.

Those are two lessons I hope never to learn again.

Bryn and Elle spent a large chunk of yesterday putting on dress up shoes and prancing around the kitchen floor. They were experimenting with the sounds the shoes made and having a good time doing it. Bryn would get the 2 fake Cinderella shoes on her feet and then jump up and down until she fell, which was apparently hilarious. Having only one set of fake Cinderella shoes, I thought Elle might like to try a pair of my shoes. Unfortunately for Elle, I don't own any fake Cinderella shoes...or anything that even comes close. To substitute, I found platform boots and crazy platform Skechers that come out only for Halloween with a Disco costume. She wasn't satisfied and asked me, "Mom, do you have any horny shoes?". That's a good question. I don't think I do. Do you?